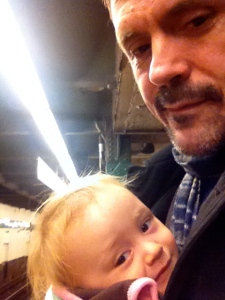 Give a listen to Episode 15: Making the Choices with our guest the essayist John Proctor, we talk about revising being true to the work and to the family we might find ourselves writing about. In “Preparing the Space,” I discuss John Berryman’s poem “On Suicide,” which of course allows me to share some happy news. Then in “What’s On My Desk” I take a look at a piece from The Common online by Kurt Caswell, “At the Phillips 66.” So bundle up, start steeping some spiced cider, get out those ginger snaps, and enjoy!

John Proctor lives in Brooklyn, New York with his wife, two daughters, and Chihuahua. An active reader on the New York City open mike scene, he’s written memoir, fiction, poetry, criticism, and just about everything in the space between them. His work has been published in DIAGRAM, Superstition Review, Underwater New York, Defunct, New Madrid, Numero Cinq, McSweeney’s, Trouser Press, New York Cool, and the Gotham Gazette, and is forthcoming in The Normal Schooland Austin Review. He serves as Online Editor for Hunger Mountain Journal of the Arts and Resident Dad columnist for the blog A Child Grows in Brooklyn. He completed his MFA in nonfiction writing at Vermont College of Fine Arts, and teaches academic writing, media studies, and communication theory at Manhattanville College. You can find him online (including links to his work) at NotThatJohnProctor.com/.

Check out Kurt Caswell’s piece: “At the Phillips 66” up at The Common.

Reflexions on suicide, & on my father, possess me.

I drink too much. My wife threatens separation.

She won’t ‘nurse’ me. She feels ‘inadequate.’

We don’t mix together.

It’s an hour later in the East.

I could call up Mother in Washington, D.C.

But could she help me?

And all this postal adulation & reproach?

A basis rock-like of love & friendship

for all this world-wide madness seems to be needed.

Epicetus is in some ways my favourite philosopher.

I still plan to go to Mexico this summer.

D. H. Lawrence has a wild dream of it.

Malcolm Lowry’s book when it came out I taught to my precept at Princeton.

I don’t entirely resign. I may teach the Third Gospel

this afternoon. I haven’t made up my mind.

It seems to me sometimes that others have easier jobs

Well, we must labour & dream. Gogol was impotent,

somebody in Pittsburgh told me.

I said: At what age? They couldn’t answer.

That is a damned serious matter.

Rembrandt was sober. There we differ. Sober.

Terrors came on him. To us too they come.

Of suicide I continually think.

When I was young my thoughts were Epicedian—no, I mean to say this is not a dirge—I could understand the work of Epicetus before I read him. There has always been the image and the subterfuge of the word. “Ceci n’est pas une pipe.” To commit the act is to lie.

In a field tonight or next year—the storm—lightning has struck and in time we may stumble across the split boughs or singed field. The leftovers of the event. And we will know, this is not the event. It is the aftermath. Perhaps this is where we get on our knees with Magritte and write, “this is not the strike.”

But how do we commit to an act of art and in that very process acknowledge that this is all an act? What becomes of the matter we affect in our hands when set out for all these denizens who lately pass by ever so late?

It is the creation or destruction we leave on the page, on the stand, in the gutter, beneath the fingers, passed the eye, in the ear, or by the nose where we wish to be the object. Being that the remnant will remind the audience of the act. The mark becomes totem and testament to the event. And those of us in the stands often nod as though this is the fact into an accusative end of motion; the matter.

Over time & language we continue to create a series or group of words—an established communication—of meaning that cannot be deduced by the words together or alone; idioms pepper every interaction.

Some two thousand years ago upon the rostra to utter “Novis Rebus” would be today’s red ticker on the bottom of the screen with “Breaking News” in some strobe-lit-pixel-effect. The most accurate translation of this idiom is “revolution.” Our phrase for re—again, and volvo, volvere, volui, volitum—to roll or turn over.

To the Romans new ideas were revolutions, to us etymologically we look for the past turned over again. Each year Berryman said he committed suicide. In his art he was Henry, so each year meant a phoenix, he could kill Henry & write him again. In his poetry, he exercised ; what fools went and named confession.

What I say next…This is hard. I have slit my wrists, thrown a belt over my closet door & slammed it shut without masturbating; I’ve sawed my radius. I’ve jumped from steps, stairs & balconies. I’ve thrown the front wheel of my bicycle down a dirt road, jumped off the mountain & careened into the valley. I’ve broken my tibia through the fibula with a cracked femur; my humerus went left as the body went right; I broke my radius and the ulna on both arms at the same time; in a home improvement store I tagged my sister six years older than me for the first time & turned around to split my skull in two on the corner of a basket of bolts. I jumped out of or ran across the road to kneel before a series of swerving motor vehicles. Even when I was first married, my wife hid the kitchen knives.

I thought I could die.

The night before my fifteenth birthday I remember being really high; smoking one last bowl before bed; the stars were beautiful. That night in my dreams, what I would later name my shadow over my Id, told me that I had lived half of my life; I had fifteen years to be the fruit of the fuck of it.

Even in my twenties, a year after meeting my tribe, I staggered out into the alley with a chef’s knife and fell to fillet my wrist beneath the city lights; amber and blood.

Four days ago, Berryman jumped off a bridge in 1972.

Coke annoys me. Pot sets all the doors I have known some 20,000 leagues away, and leaves me anxious. A pint of vodka is a circus I can dance under. Whiskey steals the keys and has an inkling to drive the car off the bridge. And while nicotine soothes me, it clogs my arteries; swallows me in smoke. I reach across the table and my hands tremble.

Kate Donahue, Berryman’s third wife said that poetry kept him alive and when he was done with his Dream Songs there was nothing left in his way.

Again, Berryman said that each year he committed suicide; he killed the self to begin again; he wrote more.

I spent almost thirty years fascinated by Achilles and death. Horus and Rimbaud and Joan of Arc and Hendrix and Shelley and Joplin and Cobain and Morrison and good old Jesus. The god made flesh that had to die.

But now I’m thirty and days running. I’m tired of trying to die, let alone the return of Saturn. I’m ready to live.

Berryman attempted the reinvent himself every year; he changed his name from Smith; he left Oklahoma for New England; he went off to Cambridge and grew an accent; in The Dispossessed he chose to become Yeats; he married Eileen and then found Chris and later Kate; he met Henry Bones; his life became that gyre in “Second Coming,” his center could not hold. Berryman could never leave that stoop where his father fired a bolt through the temple.

I understand being obsessed with my childhood, the breaks, bruises & cuts. And maybe this is just the manic upswing where I deem the world beautiful. But with all do respect, I don’t think Mr. Berryman found any new matters, I think of his suicides and rebirths as merely the matter turning over. I say this as someone who reads Berryman almost daily.

I find it interesting that he mentions Gogol, for me it’s like mentioning Paul Valery. Both are writers that survived the long haul. They did not burn brightly only to be snuffed out by their obsessions. They survived. Valery going as far as giving up poetry for decades, only to come back swinging. Gogol only realizing that writing might be his salvation toward the end. Both with a lasting effect on the literature of their countrymen, which means that each is integral to the last century of Western Writing.

Berryman is also a poet that in time will not be dismissed as a Pound or Elliot; simply a point without legacy. His writings may have merely turned over, but a lifetime of reading Dream Songs, I think would be well read. Add some Whitman, Cummings, Emily Dickinson & William Carlos Williams, then you got yourself a library.

So what am I saying? After six days of being thirty, I can finally say that I am not going to kill myself; sooner or later. I’m turning over; my revolution is one of new matters. I wish to be a dance of fire like my buddy Nataraja burning the world so that it can be born again.

Yesterday, I found out that in about 12 to 14 weeks I’ll have a boy coming into this world. Aiden Bodkin. One day if you’re listening, son, know that in the womb I saw you dancing & at the moment I was ready to begin again. You were the little fire that made me write this. I will write my tragedies, errors, obsessions, and what your mother will think are my ill attempts at humor. But I will be here as long as my body allows Tum Tum.

My students think you’re going to burst from the womb with a full beard—no pressure—I’ll teach you the art. And unlike me, your mother’s father has a full head of hair, so you can expect a fine quaff well into your golden years. After Uncle Joel, Aunt Meghan, Uncle Rafael and Aunt Victoria, just wait until you meet the tribe—Charlie, Caitlyn, Andrew, Tatiana, Lee, Liz, Summar, Steve, this next fellow John, and David and Judy Savage, they’re sure to keep you wild; which is exactly what your mother and I want.  All I ask is that you read Berryman on your own because I’ll probably mention him and Batman from time to time. You are the event, even if I etch “this is Aiden” into your crib.