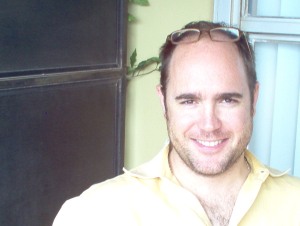 Welcome to 2014 with Episode 14 Leaving Knives in the Garage with our guest, playwright, author and poet,  Andrew Marshall. We discuss managing the expectations of the audience, determining the self-monitoring spigot, and learning how to enjoy the world with a dog. In “Preparing the space,” I discuss getting older and returning my writing to Saturn in a non astrological way. Finally in “What’s on my Desk” this week I read the opening sections of Ben Segal’s “Yes Hog,” be sure to check out the rest of the story up at the Collagist. Hope you made some good New Year’s resolutions, but in the mean time gather round the stove, mend your socks, and enjoy!

Andrew Marshall is a writer in Tulsa, Oklahoma and a 2012 graduate of the MFA in Writing program at Vermont College of Fine Arts, where he studied fiction.  He has been published in Red Wheelbarrow, Mysterical, Headlinemuse and the Austin Review. He also received his MFA in playwriting from USC in 2000.  In 2005, he wrote and directed the professional theater production of his play, Pan, with Long Beach Shakespeare Company.  In 2003, his play, Emptier, was produced at the Hudson Theater in Hollywood and directed by Kristin Hanggi.  His play Personal Stigmata received a staged reading at Theater of Note in Hollywood in 2004.  Currently, he is writing a novel about a half man, half rabbit in 1850’s California called Hendo.

Read the rest of Ben Segal’s piece “Yes Hog” up at the Collagist.