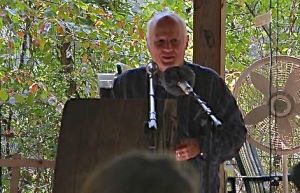 Do traditions carry us across a fallible passage? We read the sentence as is, the subject confronts the verb like a ship waiting to ferry or affect the object that we must admit remains out of reach; the edge of the possible. The poet Richard Jackson offers a talk “Out of Reach: Some Notes On How It All Began and Where It Is Headed and The Need To Read In Order To Write,” while I try to part the gray & confront the cosmos. Say no to Drugs, Write, Listen & Enjoy!

The passages of discussion have been formatted in bold.

Now’s the time for drinking deep, and now’s the time
to beat the earth with unfettered feet, the time
to set out the gods’ sacred couches,
my friends, and prepare a Salian feast.

It would have been wrong, before today, to broach
the Caecuban wines from out the ancient bins,
while a maddened queen was still plotting
the Capitol’s and the empire’s ruin,

with her crowd of deeply-corrupted creatures
sick with turpitude, she, violent with hope
of all kinds, and intoxicated
by Fortune’s favour. But it calmed her frenzy

that scarcely a single ship escaped the flames,
and Caesar reduced the distracted thoughts, bred
by Mareotic wine, to true fear,
pursuing her close as she fled from Rome,

out to capture that deadly monster, bind her,
as the sparrow-hawk follows the gentle dove
or the swift hunter chases the hare,
over the snowy plains of Thessaly.

But she, intending to perish more nobly,
showed no sign of womanish fear at the sword,
nor did she even attempt to win
with her speedy ships to some hidden shore.

And she dared to gaze at her fallen kingdom
with a calm face, and touch the poisonous asps
with courage, so that she might drink down
their dark venom, to the depths of her heart,
growing fiercer still, and resolving to die:
scorning to be taken by hostile galleys,
and, no ordinary woman, yet queen
no longer, be led along in proud triumph.

“Objects In This Mirror Are Closer Than They Appear”

Because the dawn empties its pockets of our nightmares.

Because the wings of birds are dusty with fear.

Because another war has eaten its way

into the granary of stars. What can console us?

Is there so little left to love? Is belief just the poacher’s

searchlight that always blinds us, and memory just

under the broken rudder of the moon, soldiers

cut a girl’s finger off for the ring, then shot her and the boy

town. Listen to me, – we have become words

without meanings, rituals learned from dried

river beds and the cellars of fire-bombed houses.

Excuses flutter their wings. Another mortar round is

arriving from the hills. How long would you say

it takes despair to file down a heart?

When, this morning, you woke beside me, you were mumbling

how yesterday our words seemed to brush over the marsh

grass the way those herons planed over

a morning of ground birds panicking in their nests.

When my father left me his GI compass, telling me

it was to keep me from losing myself, I never thought

where it had led him, or would lead me. Today,

beside you, I remembered simply the way you eat

a persimmon, and thought it would be impossible for each

drop of rain not to want to touch you. Maybe the names

of these simple objects, returning this morning

like falcons, will console us. Maybe we can love

not just within the darkness, but because of it. Ours is

the dream of the snail hoping to leave its track on the moon.

we are sending signals to worlds more distant

than what the radio astronomers can listen for, and yet-

And yet, what? Maybe your seeds of daylight will take root.

Maybe it is for you the sea lifts its shoulders to the moon,

for you the smoke of some battle takes the shape of a tree.

On your balconies of desire, in your alleyways of touch,

each object is a door opening like the luminous face of

a pocket watch. Maybe because of you the stars, too,

desire one another across their infinite,

impossible distances forever, so that it is not

unthinkable that some bird skims the narrow sky where

the sentry fires have dampened, where the soldier, stacking

guns in Death’s courtyard, might look up, and remember

touching some story he carries in his pockets, a morning

like this blazing through the keyholes of history, seeing not

his enemy but those lovers, reaching for each other, reaching

towards any of us, their words splintering on the sky,

the gloves of their hearts looking for anyone’s hands.